I was very fortunate to grab a last minute place on this Northern Ireland Bonsai Society workshop with Peter Warren of Saruyama Bonsai in Newtonards last weekend. A 500 mile round trip in 24 hours left me physically tired, but the experience of working once more with Peter was educational and energising. 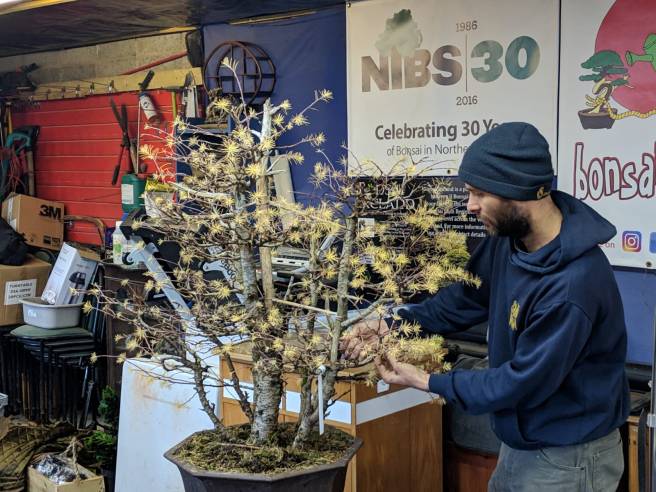 My tree was a larch clump collected in late 2014, it was first worked on in early 2016 at a Munster Bonsai Club workshop. It has a main trunk and several smaller trunks radiating around it, which emerge from beneath the surface. Part of any future re-potting will be to explore these secondary trunks and try to make more explicit their connection to the main trunk.

Because it had grown so well over the past few years it was quite dense and cluttered looking. I had expected a lot of growth to be removed and while quite a few were shortened and some removed it was remarkable that there was much less chopping than I thought there would. This is probably due to the input of Ian Young during a one to one session where we did some summer shoot pruning (but allowing some areas to strengthen where required). 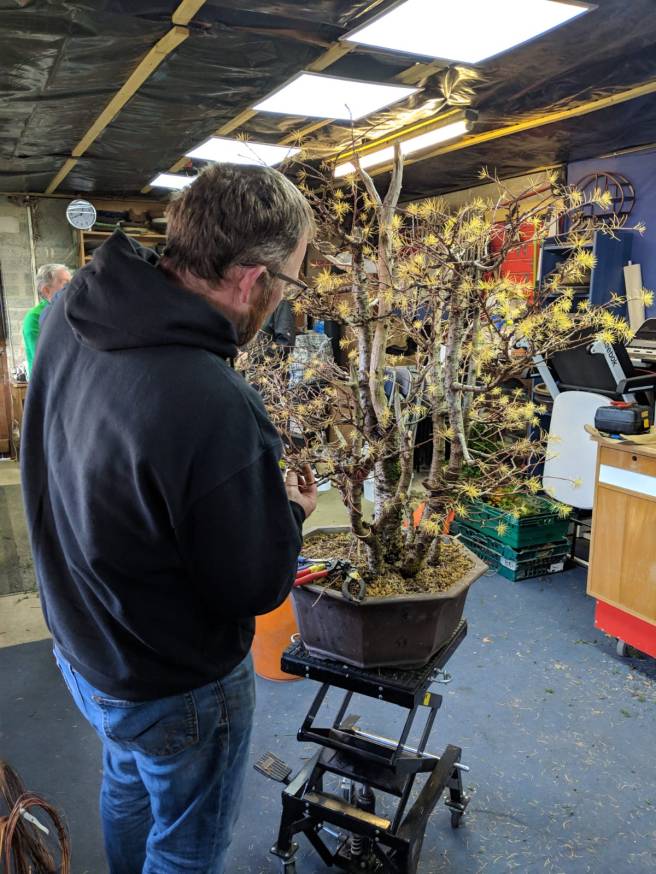 After the initial critique, I was set to wiring branches which Peter then positioned. Next he talked me through the next set of branches and so on. As the day progressed I was a little sorry I hadn’t brought a smaller tree, and it was easy to get distracted and look on as Peter worked on other trees, which were quite diverse with Pine, Hinoki, Spruce, Maple, Juniper and Beech all present at various stages of development and re-development.

Fortunately, our host, Ian Young (Bonsai Eejit) assisted with some wiring to catch me up along the way, while also doing likewise for the other participants.  It was great too, to catch up with bonsai nuts from the NIBS club and from the Leinster club.

The ‘finished’ tree of course is not finished. There are a few relatively weak areas on the tree which need to strengthen including another secondary trunk which has quite a lot of free growing to do thicken up.  I look forward to its continued development.

passionate humble beginnings... on a balcony

The Bonsai of Seb

Welcome To My Bonsai World!

an irreverent blog by a questioning bonsai artist

My Life in Bonsai and Ancient trees

Fun things I see and do in my bonsai life.